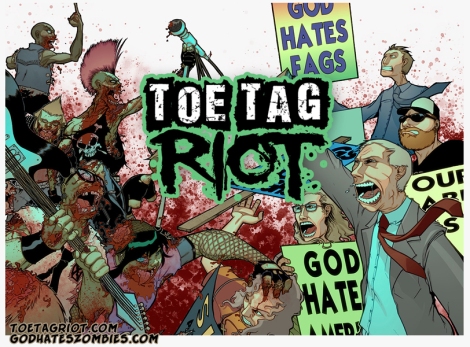 Finding that the transformation back into regular, filthy, punk rockers is taking longer and longer every time, the members of Toe Tag Riot go on a last cross-country tour in pursuit of the cure to their affliction, but being the ethical sometimes-zombies that they are, the band sticks to slaughtering only the worst of what humanity breeds: the homophobes of ONE MILLION MOMS, sexist date rapist DUDEBROS, and racist SKINHEADS, all on a path to an explosive showdown with the “God Hates Fags” hatemongers known as THE WESTBORO BAPTIST CHURCH.

Combining elements of classic horror like Night of the Living Dead with a comedic monster edge a’la a GWAR live concert, TOE TAG RIOT is being described as “a satirical book for anyone who loves FUN and hates JERKS like the Westboro Baptist Church.”

“I’ve always wanted to take a look deep inside the mind of a Westboro Baptist Church member. And by that, of course, I mean I want to see zombies eat their freakin’ brains.” – MATT MINER, writer

“We all know deep down inside that Shirley Phelps is a terrible human being and we want to show people some of those insides.  Like on the floor, or wherever.” – SEAN VON GORMAN, artist 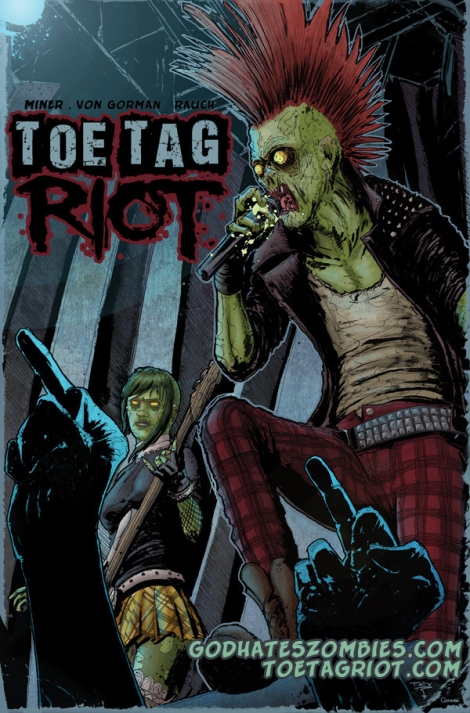 Backers to the Toe Tag Riot Kickstarter project have a wide range of rewards available to them including copies of Toe Tag Riot, original art, T-shirts, and appearances in the book itself.

The Kickstarter can be found at : https://www.kickstarter.com/projects/mattminer/toe-tag-riot-comic-series-by-matt-miner-and-sean-v

or by using the redirect URLs of toetagriot.com or godhateszombies.com

Redirect URLs that point to the Kickstarter project: toetagriot.com and godhateszombies.com